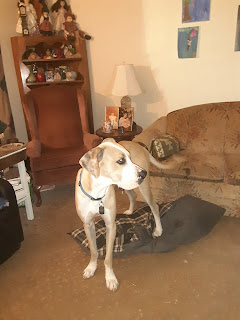 Swept and mopped the kitchen and dinning room floors before ﻿Ian brought Midas over around 6 PM.

Ian never got around to taking Midas to the vet. He thinks he's okay, even though he still isn't eating much.

He complained his throat hurts too much when he swallows, so he isn't eating well.  He also complained about being really tired, not having any energy.

Midas suddenly started barking at the front door. Ian did not lock it when he left. So I've been sitting here all this time with an unlocked door.

I've been out in the backyard several times. Someone could have slipped in and hidden in one of the bedrooms.

Surely Midas would be throwing a much bigger fit if a stranger was inside the house.

He doesn't look worried. Neither am I.

Popular posts from this blog

February 22, 2021
Recently I saw an article implying that millions of absentee votes were received from deceased voters. Whether or not we take the shouts of voter fraud seriously, there is definitely a need for debate on methods of preventing future fraud. One of the simplest methods of preventing fraud could be fingerprinting. Why not require a fingerprint at the polls, on voter registration cards, and on absentee ballot forms? I'm not saying we should have to include fingerprints on the ballot. Everyone wants to protect their identities, and the 'sacred secrecy' of their vote. I'm saying we should require fingerprints as part of the identification process already required at the polls. I've never voted with an absentee ballot, but I am certain there must be some sort of identification form that must be filed along with the ballot. I'm certain right-wing extremists would scream it's unconstitutional to require fingerprints in order to cast a vote. Bullshit.
Post a Comment
Read more

A Kick in the Balls

July 26, 2022
The day started off on a high note. The espresso machine is invigorating. Temps didn't reach 100 before noon. The dog didn't eat breakfast, but he seems feisty enough. And, I was celebrating writing 3,336 words last night.   Then my son tested positive for COVID. Again. His dentist's office routinely checks all their patients before seeing them. Ian is anti-covid vaccinations. Even after going through it once. I've tried to convince him to get a vaccination for my benefit. I'm an old fart. I'm high risk. If he gives me COVID and I die,   he'll feel guilty. There is a strong possibility he has no concept of the meaning of guilt. Which could be a good thing. It could mean he's never done anything bad enough—that I know about—to feel guilty. As his mother, I refuse to contemplate the alternative meaning of a guilt free mind. To test positive today, he was probably a carrier last week. I have seen him briefly during doggie drop offs and pickups th
Post a Comment
Read more

Who is writing Nina Dobrev off The Vampire Diaries?

May 07, 2015
Rumor has it Nina Dobrev is leaving   The Vampire Diaries .   They've set up a scenario in which, the now human, Elena Gilbert ( Nina Dobrev ) could be killed off in the next episode, "I'm Thinking of You All the While", the Season 6 Finale, May 14, 2015.      SPOILER ALERT : Tonight's episode, "I'll Wed You in the Golden Summertime", ended with Elena on the floor, surrounded by shattered glass, looking dead, again.    Can the show survive without Elena Gilbert?  The entire story revolves around the love triangle between Stefan Salvatore ( Paul Wesley ), Elena, and Stefan's brother, Damon Salvatore ( Ian Somerhalder ). Damon's supernatural outburst of intense grief may hold the audience's interest for the first three or four episodes of Season 7. Interest could be piqued even longer if Damon is forced to hunt down Kai Parker ( Christopher Charles Wood ) before annihilating him in the most gruesome fashion al
Post a Comment
Read more